There could not be a finer place
Than a U.S. Military base
To celebrate America’s day
In new and old-fashioned ways.

Fourth of July! America’s spirit comes alive with bombs truly bursting in air. The public had the opportunity to spend this July 4th evening on Marine Corps Base Camp Lejeune, along with the men, women, and families of active military and veterans. This is a place that oozes purpose, and tonight’s mission was to celebrate.

Parking at the base PX shopping center, a half-mile stroll or optional trolley brings all to the grounds of W.P.T. Hill Field. The crowd is gathering by the minute. Security is appropriately tight, which in no way can be termed an inconvenience; it’s a pleasure to be here.

Festivities having already begun, we are greeted by the sounds of the band Vetted, who are wounded warriors now out of the service with a mission to ensure that those formerly in the ranks and now most needing of support are remembered and assisted. These guys are ready to rock, and they stoke the swelling crowd with energy.

And now a word from our host, Brigadier General Robert F. Castellvi. I’ve listened to CEOs, CIOs, and many VIPs, but this guy has a more impressive resume’ than any of them, one built from hard work, continuous training, achievement, and service.

Before introducing the main act, the Commander tells the crowd to be prepared for the best fireworks we have ever seen. “Nice words,” begins the thought that flashes through my mind, “but I’ve seen Santa Monica pre-dawn fireworks, Cincinnati’s great Labor Day show with ‘crowd-sourced’ musical accompaniment (before that was a term), and New York City’s 1987 epic display up and down the Hudson and East Rivers to celebrate the 100th birthday of the Statue of Liberty.”

By the end of the night two impressions will replace that first thought: One, I’m always thrilled to enjoy good fireworks; two, a Marine will be honest and direct, so when told to expect “the best,” it is safe to set your expectation as high as the dark night sky.

The Base Boss gives a rousing introduction, then the crowd erupts for Chris Daughtry, who leveraged American Idol as a launching pad, has toured and recorded for nearly a decade, and tonight is a North Carolinian returning home to play for the Corps.

I was expecting a limited show, but Daughtry does what is expected on this base of operations: give 100%. He rocks a full set of songs. Many are the crowd’s Daughtry band favorites, but he also covers Phil Collins’ “In the Air Tonight.” The encore of his own tune “Superman” steals the show for me, with perfect graphic complement on the video screens behind him.

As Daughtry closes with feeling and purpose for this audience in his song “Home,” the promised incendiary spectacular erupts with a bang! (and another bang!, and even bigger bang! bang! bang!). The crowd of young and old are enthralled for a “mere 18 minutes,” but with a pulse throughout that most fireworks hold for the “grand finale.” Get a feel for the band’s finish and the fireworks beginning in the 4-minute video embedded here.

It took about two minutes to concede that Commander Castellvi was being Marine, and true to his word this was absolutely one of the best presentations of my life, with scenes new and different, refreshing and amazing, delightful and deafening. There were fountains of color and light sent into the dark sky to cascade down in waves.

Indeed, the intensity was like the eruption of the Bellagio’s water fountain in Las Vegas, with water-like features in the mix, accompanied by thunder like the rapids at the base of Niagara Falls. And yes, of course the ending ramped up to even more jaw-dropping, hands-over-the-ears levels, but this show did not “build up.” It was on top of the world from the moment it began – – befitting every aspect expected of a United States Marine show of force.

Thank you to the bands, Vetted and Daughtry. Thanks to the Founding Fathers for giving us this day. Thank you to Camp Lejeune for allowing the public a great privilege. I’m not a soldier, and certainly no substitute for General MacArthur, but I can promise you, like that other Douglas, that “I shall return” if you grant me the honor.

Enjoy the final fifteen minutes of Camp Lejeune 2015 fireworks from our vantage point barely 50 yards from their launch site by clicking on the link below. It is most powerful in a darkened room on a larger monitor.

If desired, enlarge the show to full screen by clicking on brackets that look something like this [ ] in the lower right corner of the video, then return from full screen to this embedded window by pressing the ESC key on your keyboard. 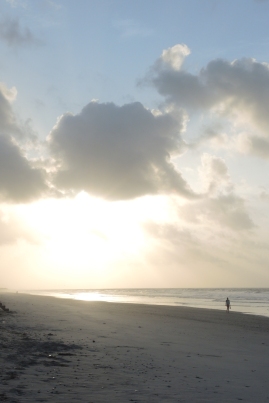